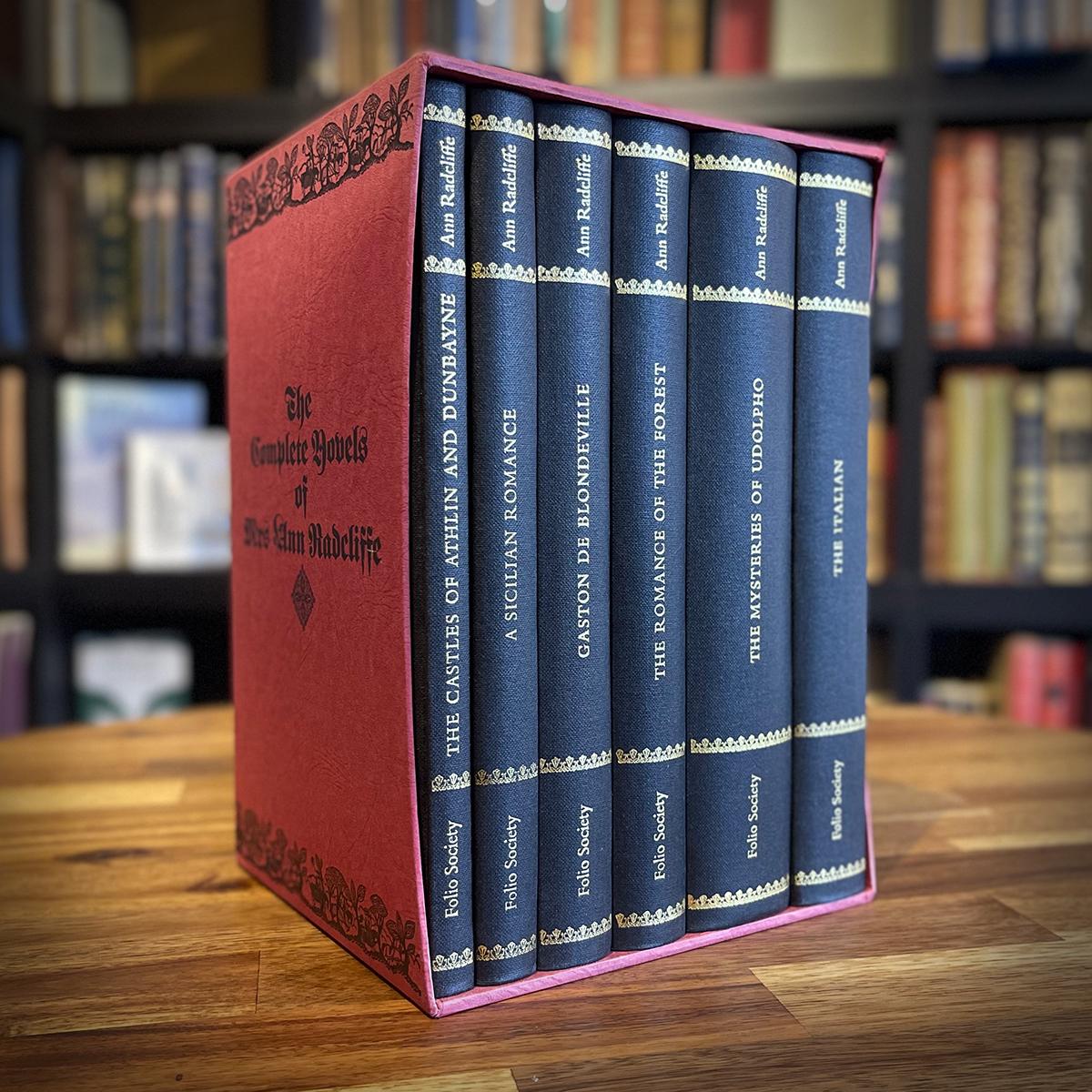 The Complete Novels of Mrs Ann Radcliffe, comprising:
The Castles of Athlin and Dunbayne
A Sicilian Romance
Gaston de Blondeville
The Romance of the Forest
The Mysteries of Udolpho
The Italian

Six hardback volumes in slipcase.
Watermark on top of slipcase, books are however pristine.

The novel tells the story of two clans, those belonging to the Castles of Athlin and Dunbayne. The novel’s plot follows the young Earl of Athlin, Osbert, who seeks to take revenge against the unlawful murder of his father by the Baron Malcolm twelve years earlier after meeting the peasant Alleyn (who is later revealed to be the true heir to the castle of Dunbayne).

The plot concerns the fallen nobility of the house of Mazzini, on the northern shore of Sicily, as related by a tourist who learns of their turbulent history from a monk he meets at the ruins of their once-magnificent castle.

The Romance of the Forest Synopsis

Set in a Roman Catholic Europe of violent passions and extreme oppression, the novel follows the fate of its heroine Adeline, who is mysteriously placed under the protection of a family fleeing Paris for debt. They take refuge in a ruined abbey in south-eastern France, where sinister relics of the past – a skeleton, a manuscript, and a rusty dagger – are discovered in concealed rooms. Adeline finds herself at the mercy of the abbey’s proprietor, a libidinous Marquis, whose attentions finally force her to contemplate escape to distant regions.

The Mysteries of Udolpho Synopsis

The story of orphan Emily St. Aubert, who finds herself separated from the man she loves and confined within the medieval castle of her aunt’s new husband, Montoni. Inside the castle, she must cope with an unwanted suitor, Montoni’s threats, and the wild imaginings and terrors that threaten to overwhelm her.

From the first moment Vincentio di Vivaldi, a young nobleman, sets eyes on the veiled figure of Ellena, he is captivated by her enigmatic beauty and grace. But his haughty and manipulative mother is against the match and enlists the help of her confessor to come between them. Schedoni, previously a leading figure of the Inquisition, is a demonic, scheming monk with no qualms about the task, whether it entails abduction, torture – or even murder.

Set in the thirteenth-century court of England’s King Henry III, the novel centers around the wedding of the title character. The wedding is interrupted by a merchant who claims to have been wronged by Gaston, in that Gaston murdered his kinsman. Henry is forced to hold a trial to determine the validity of the claims. The plot is further complicated by the machinations of an abbot who tries to suppress the truth, and by ghosts who want to expose the truth.

Please contact us if you would like more details or to see more images of The Complete Novels of Mrs Ann Radcliffe.

Ann Radcliffe (9 July 1764 – 7 February 1823) was an English novelist and a pioneer of Gothic fiction. Her technique of explaining apparently supernatural elements in her novels has been credited with gaining respectability for Gothic fiction in the 1790s. Radcliffe was the most popular writer of her day and almost universally admired; contemporary critics called her the mighty enchantress and the Shakespeare of romance-writers, and her popularity continued through the 19th century.

Why buy The Complete Novels of Mrs Ann Radcliffe from Daker Books?

Daker Books wants to help its customers seek out second-hand books of the highest quality. To aid in this goal, we have identified that The Folio Society produces books that many of our regular visitors desire. For over 70 years, The Folio Society has published beautiful, illustrated editions of the world’s greatest books. They aim to produce unique books that are outstanding in both their literary content and physical form, and that will grace every bookshelf.

We currently have a large number of out-of-print Folio Society books and are increasing our stock all the time. Please check out our stock at the link below, and if you’re looking for something that we don’t have, we’d be delighted to source it for you.